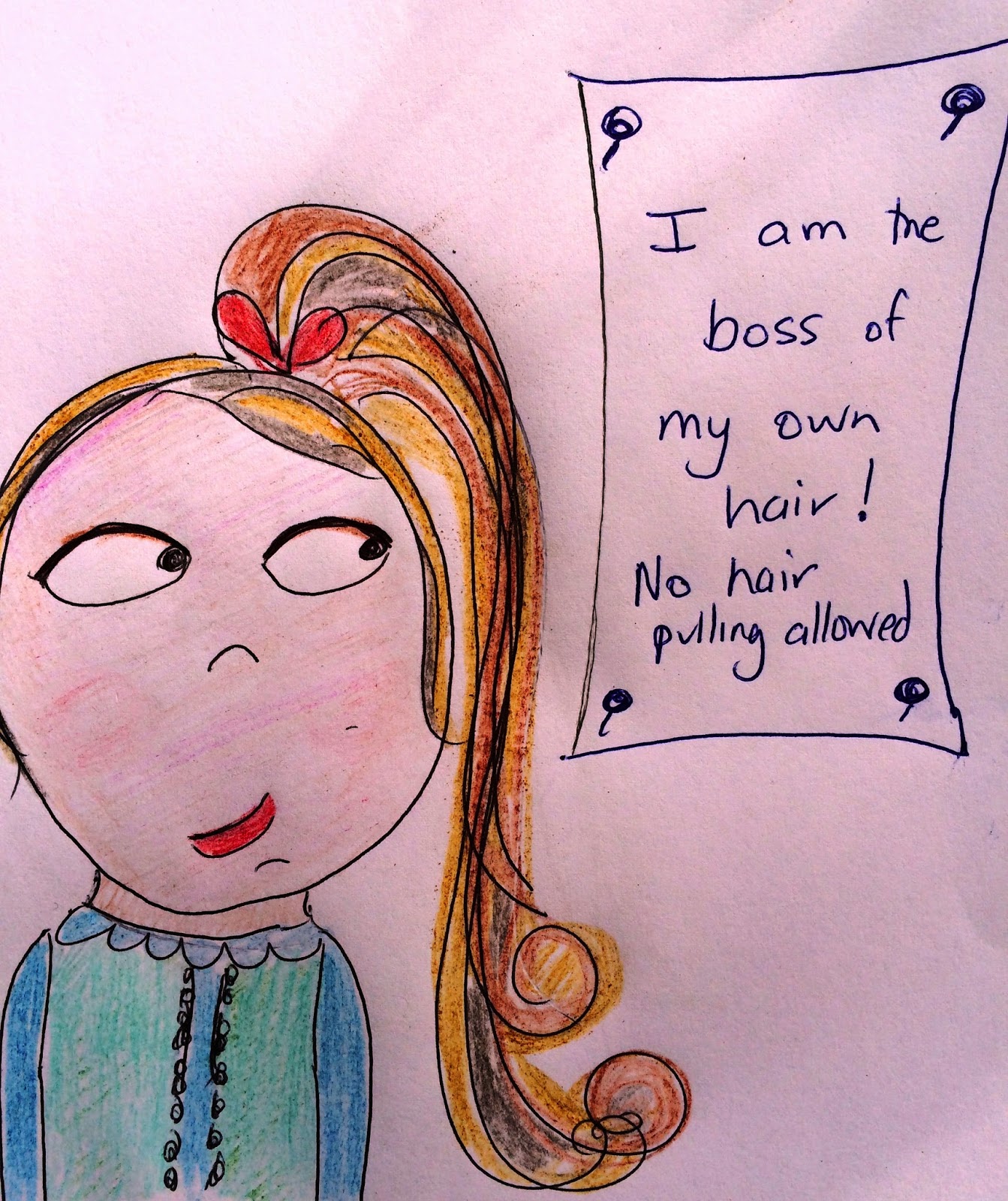 Once upon a time, in a school not very far from here, there was a bit of a problem. A cool boy had got elected as chair of the school council and at the start it was all fun but now he and a small group of his friends were starting to be a bit mean to some of the other kids.

One of the things the boy did was he pulled girls' hair.

I know, pretty dumb isn't it? Especially if you are wanting to be a school leader.

At the beginning I don't think he meant any harm, he’d just pat little kids' heads and give their bunches a tweak but after a while it got pretty annoying, and some of the girls got really sick of it, but no one knew exactly what to do, after all he was the head of the school council and some of his friends could say pretty mean things so people didn't want to speak out.

None of the boy’s friends told  him to stop, mainly because they wanted to stay hanging out with his group, so if a girl got upset about the hair pulling, the friends would just laugh and make it worse by starting to jeer, “ lt’s just a joke! Jeeze Can’t you take a joke?”

And if any of the girls felt  upset they would just sort of shrink away.

When that happened the boy and his friends felt a tiny bit uncomfortable too, so they laughed a bit harder and said to each other, very loudly,  “Girls  who can’t take a joke are just boring.  Yeah -Boooooorinnnnng!”

To be honest the bullies knew what they were doing was stupid. Some of them even felt a little teeny bit scared, secretly, late at night, or before school.“What if the others ganged up on ME next?” they wondered,  “What would I do?” It's much easier if I just laugh and pretend it is nothing, because  I like hanging-out with the cool kids, even if they are a bit mean, it makes me feel important.

So while quite a lot of kids felt unhappy, no one quite knew what to do - now in real life they could have talked to a teacher, but at this school and in this story they didn't have to.

Because  one day something amazing happened.

Or rather someone amazing happened.

This amazing person was a girl called Amanda.

At first she didn’t know she was amazing. She was pretty much like all the other kids except she was a very good writer and she had long hair.

She  worked in a little cafe  after school where lots of other kids liked to hangout hoping the cool kids on the school council would notice them.

One day the boy and his girl friend walked into the cafe and ordered some food. While he was waiting for the food he got a bit bored. People were looking at him like he was supposed to do something interesting but he didn’t feel interesting, he just felt a bit bored.

So he looked around and saw Amanda’s lovely long ponytail. He waited til a few other kids were watching him and then he reached out and pulled it.

"Ouch!" thought Amanda, that hurt. What an idiot.

“HAHAHA” laughed the cool boy’s friends, and kids who were trying to impress him, “Good one!”

The boy’s girlfriend didn’t like it, “don’t do that” she said, but she was smiling when she said it because that is what she thought you had to do if you are the girl friend of a cool boy, you smile a lot.

Amanda didn’t say anything. She just passed them their food order and walked quickly away.

So the next time the boy came in and started trying to pull her hair, she looked at him very bravely,  and said, “Stop, I don’t like it”. (Just like the teachers taught her at Kindy).

She said it in quite a fierce voice, even though she didn't feel very fierce.

The boy looked a bit surprised. Then he felt a bit silly. But he didn’t like feeling stupid in front of his friends,with everyone looking so he said, “OOOOH-it was just a joke, here have a Mars Bar.”

“ I don’t like Mars Bars” said Amanda. “I just want you to say sorry and go away.”

The boy felt a bit confused, then he got a bit cross. “Everyone always likes me joking, why doesn't she?” he thought, “ It was just a joke” he said grumpily, and he gave her hair one last tug before he left, just to prove he could.

That made Amanda mad, and even though she felt scared, she decided to do something about it.

So that night, because she was a good writer, she wrote a blog. And she posted it.

“A Notice to our school's Head Boy-No hair pulling, it’s just not OK”

Next day all the kids at school were talking about Amanda’s blog.

This time not so many kids were laughing, in fact quite a few kids felt a bit ashamed.

Some other kids who went to other schools had read the blog too and they thought it sounded a bit weird and mean. “Why does the head of the school council pull kids hair and why doesn’t anyone stop him?” they wondered

But the cool boy was still popular in his school, and because his friends also felt a bit silly and ashamed, their started jeering more loudly, so they wouldn't have to think about it all too much.

Some of the boys friends ran the school newspaper, radio and facebook pages and they were cross, (and also a tiny bit jealous because Amanda was actually a really good writer even if she was a junior kid at school) .

One of these writers was a mean girl who wrote some mean things in the school facebook about Amanda. (It wasn’t cool , it was  just mean and some kids thought it broke the school code about how to post on the facebook page). Other friends of the boy used the school radio station  to say mean things like,  “Can’t you take a joke?” or, a really weird one “Amanda's got  political, she just wants to be on the school council herself!”.

So this is where Amanda got even braver, and so did lots of her friends, friends Amanda didn't even know she had until she spoke out.

Amanda's friends had lots of ideas to help. One of the ideas was that she could join a union, a club for kids and grownups who work in cafes and restaurants, called UNITE who can help people sort out about what is fair and not fair at work, so you don't feel alone when awkward things happen, like boys come into your cafe and pull your hair and it makes you unhappy, but you don't want to make a fuss.

Other people thought Amanda could set up a student newspaper, one that wrote about stuff that mattered for ordinary kids at school,  the kids who aren't friends with bullies.

And Amanda thought about the school council. She didn't want to stand for the council herself, but she did want to make some changes, so she and some friends campaigned for another girl to be head of the council. They put up posters and talked about what was fair and not fair and they were very surprised to find out lots of kids didn’t feel very happy about what was going on and wanted to think about what a new school council might be like.

And that is why I think Amanda is really amazing, it wasn’t just that she stood up to the bullies (although that was really brave and pretty amazing all by itself) it was also  that by speaking out at school she planted a seed, a little seed of a BIG idea, that people CAN make change happen.

What kind of change? Well that’s up to all of us, you and me, and lots of people to decide, and as for Amanda I hope she lived happily ever after, knowing she was actually quite amazing,  thanks Amanda!
Posted by Assc Prof Bronwyn Hayward at 20:25